Stephen Karpman described three positions of victimhood in his diagram, ‘The Drama Triangle’. It is sometimes also known as the ‘Victim Triangle’. The three sides to the triangle are Persecutor, Victim and Rescuer. Whatever is going on, if we’re on the triangle, no matter where we start, we end up as victim, reinforcing feelings of shame and beliefs that keep us stuck. We go through these positions internally with our beliefs and internal narratives, we go through them with our interactions with others. 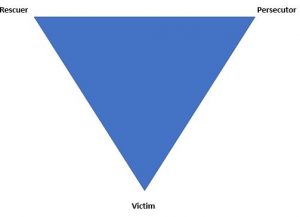 Rescuers feel the need to rescue someone, or some people. They like to help in order to feel a sense of purpose. Someone who sees themselves as a rescuer may want to help where there is some conflict. They may intervene and offer a suggestion which has one or the other two react aggressively. In a moment they go from rescuer, being accused of being a persecutor to feeling like a victim. They may even become a persecutor as they defend themselves.

Rescuers can find it difficult to see themselves as victims as they are always looking for answers and solutions. They have a misguided idea of what supporting and nurturing is but rather try to manipulate and fix in an attempt to make themselves indispensable. They are often co-dependent with a need to feel valued, and a morbid fear of being alone. When growing up their own needs were rarely if ever met, so they developed a sense of self by trying to meet the needs of others.

They thrive on the reputation of being caring and selfless, the belief being if I look after others they will take care of me, even if this rarely if ever happens. Living in a state of unfulfillment and disappointment, becoming a martyr when what they perceive as acts of kindness are not reciprocated. They cry ‘After all I’ve done for you’, and, ‘If you really loved me…’ and so on. The more they try to rescue, the more they enable others, and the less responsibility they take for themselves.

Real support involves empowering rather than fixing or enabling. It is about trying to encourage independence and self-efficacy in others.

Persecutors often see and portray themselves as victims. They are in denial about the effects of their behaviour on others. When confronted they lash out defensively and blame others. They can stick a knife in you and deny that you’re bleeding, but demand that you clean up all the blood. When you challenge them, they cry that you made a mess of their knife. After all, they only wanted to help. Again, claiming to be a rescuer and feeling like a victim.

People whose default position is persecutor often have a sense of shame as well as entitlement. They see everything as a threat to themselves. They seethe inside, repressing feelings of worthlessness. These feelings of pain are hidden behind a mask of wrath and discontentment. The persecution of others is a defense mechanism, using bullying tactics to shame others. Their fear is being helpless and powerless. They feel stronger by making others feel weak and guilty. They need a victim in order to feel better about themselves.

Persecutors don’t take responsibility for their actions, believing their victims deserve everything they get. ‘Look at what you made me do’ is a common phrase used. They justify and defend their actions rather than apologize. Persecutors behave in a grandiose way, compensating for feeling less than others.

They are wounded and in pain and see everything as a struggle, always ready to react defensively towards any imagined slight or threat. Persecutors are rarely honest with themselves, why would they be honest with others?

Taking responsibility for your own actions is a healthy way to break away from the triangle, however shame can often prevent this.

Victims feel they are less than and often resentful towards the other two. It is a role in which they identify themselves. They feel blamed, worthless and unvalued, unable to take care of themselves. They often go from victim to persecutor as they retaliate, in turn trying to turn the rescuer or persecutor into a victim.

People who see themselves as victims are often in denial about what they need to do to move away from victim hood. They not only feel stuck but want to stay stuck. It feels safer. If they don’t talk about what is keeping them stuck then it’s not real, or it’ll go away. They use guilt to manipulate others into rescuing them but never want to change. Every silver lining has a cloud, for every solution there’s a problem and so on.

If a victim tries to change others may tell them that they are the persecutor and that they’re victimizing them when they start to take responsibility for themselves. But sitting with that discomfort and allowing others their perception is part of the process of healing.

It’s difficult to get off the drama triangle unless we recognise that we’re on it in the first place. Being on the triangle prevents us from having meaningful relationships, there is a fear of intimacy. It is a belief of not being good enough yet constantly wanting reassurance. It is difficult to accept another human being, or to allow ourselves to be accepted when we struggle to accept ourselves.

The recurring theme in each position is a deep feeling of shame. Once we are aware and acknowledge our starting position on the drama triangle, which is often learned in childhood, we can begin the sometimes painful process of getting off it. In counselling and psychotherapy we can learn to identify and challenge the painful beliefs we have lived with and never questioned that keep us going round and round. We can become more aware of the dysfunctional relationships with others where we learned our roles. The lack of personal responsibility and deeply rooted fear and shame can be addressed, challenged, regulated and even expunged.