In the narcissistic family there is a hierarchy. It begins usually with either a matriarch or patriarch, most commonly known as the head of the family. From there, there is a pecking order of partner and children in which everyone has their roles.  The head of the family dominates others through either overt or covert means and does the same with their partner and children as a way of maintaining a sense of superiority. These roles often carry on into adulthood and with adult relationships with others.

Narcissistic parents raise their children through having them suffer emotional abuse. Normally through coercion, manipulation and emotional humiliation. Healthy ways to manage difficult feelings and problem solve are never taught. Instead avoidance and fear is learned.

The children grow up without appropriate coping strategies, so don’t learn emotional resilience.  Without being able to manage feelings such as guilt, anxiety and so on they are often defensive and guarded. The maladaptive coping strategies they learned in childhood just to survive the confusing and hostile environment are often carried on into adult life.

The dynamics in narcissistic families create different roles for the child or children. When the dynamics are played out violently, they are usually easy to spot. However, when carried out covertly through neglect or emotional and psychological abuse it can be very well hidden behind a facade of perfection and harmony. However, it’s just as damaging to the children. Here are some typical behaviours present in narcissistic families.

These are both spoken and unspoken.  ‘You’re not good enough, should have tried harder, why can’t you be more like him or her’ and so on are examples of spoken messages. Unspoken messages are disapproving and angry looks. Being ignored, approval withheld, or an achievement not being recognised would also be unspoken negative messages.

The children or partner are made fun of and suffer embarrassment. The purpose is to inflict feelings of shame through sarcasm, scorn and jokes with jags. Other family members laugh at them to gain approval from the abuser. The victim is left feeling humiliated but afraid to show any pain out of shame.

Children are taught that love is conditional, and they must avoid displeasure by being a particular way. The parents are typically judgmental and show little to no empathy and understanding. Nothing less than perfect is acceptable.

The children’s emotional needs and feelings are not met or even considered to be important. ‘You’re ok when I’m ok’ is the underlying message. The child’s right to privacy, even as they grow up is not respected but the parent’s must be at all times. The child doesn’t learn the difference between respect and fear.

The only feelings that are discussed are the parents. These are usually only feelings of approval or disapproval. Children in these families feelings are never discussed other than when ridiculed. Their feelings are ignored, not respected. They are not taught how to process and regulate how they feel but rather suppress them. The parents needs are what is important and it is up to the children to serve them.

One Parent Narcissist – The Other Enabler

If one parent is a narcissist it is not uncommon for the other to enable them in order to keep the marriage. The children recognise certain qualities they need in that parent. Sadly though, most of the energy is put into pacifying and serving the narcissist. The children therefore learn they are not as important.

The communication in narcissistic families is usually triangulation as opposed to direct. One thing may be said to one person so that it will reach the person it is meant for rather than confront them directly. This passive aggression creates mistrust and tension. When communication is direct, it often comes out as either rage or as ‘pity me, look what you’ve done’.

Comparing the children to each other unfavourably, the narcissist teaches them to compete for approval.  The ‘Golden Child and the ‘Scapegoat’ (among other roles) begin to form. As far as the outside world is concerned though, they are a united and loving, loyal happy family.

Ultimately the narcissistic family hides a lot of shame, hiding anything seen as less than perfect. After all, image is everything. Hence a lot of secrets. The parents may insist on attending church regularly, be upstanding pillars of the community, perform generous acts of kindness for the world to see but hide the emotional neglect and coercion of their children. The message to the outside world is, ‘We’re good, we’re happy, we’re bigger and better than others’. The children are taught to both say and believe, ‘everything is marvellous’ and to smile for the public. However indoors asked they’re taught, ‘what will other’s think?’ as a way of instilling fear. 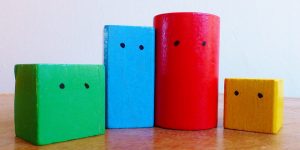 The children who grow up in narcissistic families often struggle to recognise what is actually wrong as they grew up in a family that hides a lot of pain and denial. There were always unspoken rules of how important it is how others see the family unit. The children accept and live by those rules, never questioning them out of both fear and loyalty. Those rules block emotional access to their parents and others and instead learn how to ‘behave’ as opposed to ‘be’. These unspoken rules allow the narcissistic parent to have no boundaries. They therefore control and abuse the children as they wish, even into adulthood.

As adults, the children often lack accountability and honesty about themselves and their family background. It may even come across to others like it’s worship of a perfect loving upbringing. The malignant behaviours of other family members are ignored, explained or defended. This causes a lot of difficulty in their own adult relationships where there is a lack of intimacy, trust and self-defeating behaviours. It also causes lack of self-respect, assertiveness and low self-esteem.

As one adult child of a controlling parent once said to me with conviction, ‘Never admit anything’.

Next article will be on the roles of the children in the narcissistic family.